FOPHV - A FAIR GO FOR EVERYONE!

We are pleased to say that attendees for the conference is now at full capacity. Places were limited and have now been filled.

Many thanks to Jack Verdins from Friends of Public Housing for his valuable work in preparing the following document for the Conference. Jack will be speaking on the day. 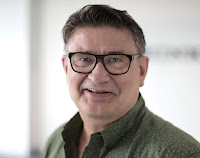 THE THREAT FACING VICTORIAN PUBLIC HOUSING
-   WHERE TO NOW? 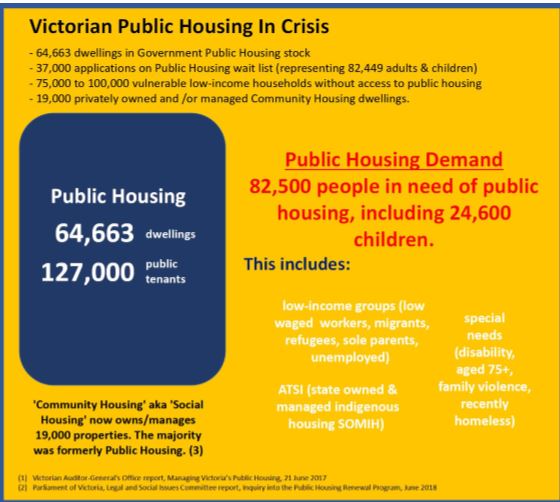 STOCK TRANSFERS
Exacerbating the problem,the government is planning to  transfer management of 4,000 Public Housing  properties to the private Community Housing Industry. A reliable source has informed us that a further 10,000 is being proposed. In the past, management transfer has often preceded title transfer. This is wrong, since Public Housing belongs to the people of Victoria and should remain in public hands.(3)
The terms and conditions are unclear,but what is clear is the strategy of the government to abrogate its responsibility for providing Public Housing to all who need it, and to privatise it instead by handing it over to ‘Community Housing’ businesses, also known as ‘Social Housing.’
There is a distinct difference between Public Housing and Community/Social Housing.
Over the last 25-30 years Community Housing groups have evolved from small organisations responding to community needs ( and government neglect ) into huge bureaucracies, embedded very much in their formal structures, utilising heavy-handed powers to manage their tenancies, pressuring and lobbying for major government funding and additional financial windfalls,and exhibiting the behaviour of “just another” large corporation. As individual businesses they have their own policies and procedures that differ from Public Housing. Community /Social Housing organisations can cherry-pick their tenants and a lot of the protections of Public Housing are missing. (such as flexible rents linked to household income.)
The Churches are very much a part of this paradigm shift - the privatising of Public Housing.
CORPORATE WELFARE
Community / Social Housing needs an ongoing stream of Commonwealth Rent Assistance - CRA -to prop them up. It is being used as an operating subsidy. Public Housing, being outside market forces, does not need CRA at all. This is public money which would be far better spent on building more public housing to address homelessness and the housing crisis.
THE PUBLIC HOUSING RENEWAL PROGRAM (PHRP)
The PHRP was announced in December 2016 to redevelop low-rise properties at eleven Public Housing sites:
Nine sites covering Brunswick West; North Melbourne; Heidelberg West; Clifton Hill; Brighton; Prahran; Hawthorn; Northcote; and Ascot Vale. Two further renewal projects at Flemington and Preston to be managed under the PHRP but budgeted for under previous arrangements.
The design point for the PHRP is to deliver an increase of at least 10% in Public Housing dwellings. This has not in fact been the outcome. The scheme also includes massive development of apartments on the estates for private sale.
In March 2019 contracts were signed for the first three estates in North Melbourne, Northcote and Preston.It was announced that the Victorian Government was joining with development partners MAB Corporation and ‘Community Housing’ Association, HousingFirst, to completely rebuild these sites. As you can see in the table below, the end result will be that Public Housing units will be replaced by ‘social housing’ units.
The outcome for Nth Melbourne, Northcote and Preston is that there will be NO Public Housing at all - zero. (4) It will have been transferred to Community Housing. 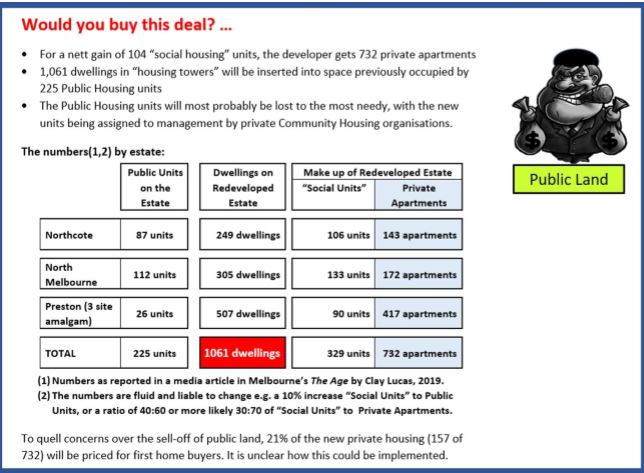