The Story So Far.

In March 2014, the Victorian Housing Minister for the Coalition, Wendy Lovell, released a Housing Policy which unveiled a plan to transfer 12,000 public housing properties to Community Housing Organisations. Richard Wynne, ALP opposition Housing Minister at the time, called the move an ‘embarrassing hoax’ and highlighted the fact that no new housing would be made available. It only would result in a change in management / ownership.

We hoped that Labor, when it won government in 2014, would not continue to perpetrate this hoax on the Victorian people, and we looked forward to working with the government to improve the public housing system. In fact public housing is in better shape than you might imagine - there has been a lot of beat-ups and propaganda surrounding public housing by those with a vested interest in seeing its demise.

However- since it was a Federal Rudd Labor government that continued with proposals for Australian States to hand over public housing to housing associations - and since the Victorian ALP had already covertly given away thousands of properties, we were naturally cautious. COAG 2009

So, following the 2014 election, we waited for an announcement by Labor, publicly scrapping the Liberal’s proposal to transfer 12,000 public housing properties - but nothing..

And Labor formally announced its intention to transfer management of Public Housing with the view to title transfer in the future. In this article Martin Foley did not disclose how many properties would be transferred. Our opinion, shared by the Queensland Housing Minister, is that management and title transfer is of course privatisation, regardless of denials to the contrary.

http://www.theage.com.au/victoria/sweeping-changes-presented-on-public-housing-in-victoria-20151018-gkbxdp.html
As usual, there was no further follow-up investigations by any newspaper, regarding such an important announcement. ( If you blinked, you would have missed it )

In the beginning of January 2015, following the Victorian election, Friends of Public Housing wrote to congratulate Minister Foley and to arrange a meeting to discuss ALP’s position on public housing and the proposed 12,000 stock transfer. We received no response.

Later in January a respected academic ( writer, editor, education consultant and former policy manager ) spoke to a staff member at Martin Foley’s Electorate Office on behalf of Friends of Public Housing urging that a meeting be arranged. No response.

In February we emailed him again. No answer. We followed up with an email attaching a document titled ‘Homes Under Threat’ -our submission to the Senate Inquiry into Affordable Housing and asking for his feedback on it. The document is well researched and presents a strong argument against giving away any more public housing. Once again, no response from Martin Foley’s office - not even an acknowledgment.

Meanwhile Martina Macey, a tenant with Community Housing, contacted Martin Foley’s office in December 2014 to facilitate a meeting. As a Community Housing tenant, her perspective is that Community Housing ( aka social and affordable housing ) is not the right model for mass transfers of public housing or of vulnerable tenancies. Despite repeatedly contacting his office, Martina believes that it was only by issuing a public challenge on social media, was she finally able to meet, not with Martin Foley, but a representative in October 2016 - almost two years later. She says “It is obvious that when it comes to what is best for the poorest of the poor, both the Labor and the Liberal parties don’t really give a damn.”

The Homeless Person’s Union has received the same treatment. In the seven months since the dispute in Bendigo St, Collingwood commenced, Martin Foley has refused to meet with them to discuss their concerns. The HPU has always been clear in their demand that Labor stop giving away public housing to business interests and the government build more public housing to meet the desperate need. https://hpuvic.org/2015/11/18/hpuv-media-release-markham-avenue-estate/

Instead of meeting with the people directly affected by the crisis, Minister Foley prefers to hold secret meetings with service providers to discuss the future of public housing, and attend executive lunches with business stakeholders.

Maybe by meeting with the service providers he can claim to have ‘consulted’ - but of course he has not.

Says Martina Macey, founder of a tenants’ support group - “Martin Foley is discussing the future of thousands of people who he has not even talked to! He has no idea of the effect that decisions to transfer public housing to Community Housing will have on tenants’ lives. Community Housing Organisations are all separate businesses, with different policies and procedures which can change at any time. What the Community Housing groups say and what they do, can be two different things. Bad practices can be well hidden and the Minister will not learn of these, unless he is prepared to listen to tenants.”

She goes on to say, “Nothing critical about Community Housing ever makes it on the news, just as nothing good about public housing is reported. The newspapers are biased.”

Minister Foley’s refusal to listen to the other side of the argument is unforgivable when so much is at stake. Our position is that Public Housing is an essential and irreplaceable public asset. We need to keep it in public hands. This is a governmental responsibility and a duty of care.
Not having a voice, not being heard or genuinely consulted, is a form of class prejudice - something that public tenants and homeless people have to deal with all the time. We don’t get to have a say in our own future.

We are not told anything. Knowledge is power, and public tenants are being deliberately and systematically dis-empowered.

In the end ‘the solution’ is to just shunt us off somewhere- like the mass evictions happening in NSW. Out of sight, out of mind. So that the real business of life - which is making money of course- can go on unchecked and uninterrupted. 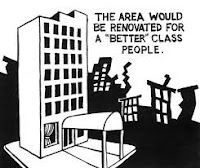