YOU CAN'T EVICT SOMEONE FOR BARRACKING FOR COLLINGWOOD! 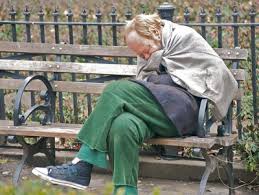 There are now voices challenging these claims and the glossy PR of Community /Social Housing - though rarely are these voices coming from those working within the housing industry, which is to be expected. We have found the media unwilling to ask the hard questions of Community Housing Organisations.

In fact Community ( social ) Housing now comprises of at least 39 separate businesses - including nine major property developers. Obviously they will differ in their motivations and operations.

It discusses the 'no-cause' eviction clause under Section 263 and 288 of the Residential Tenancies Act whereby tenants can be evicted without the landlord having to specify a reason.

Public Housing tenants are protected from arbitrary evictions like this.

The 'no-cause' or 'no-grounds' eviction procedure requires a Notice to Quit which gives the tenant 120 days to leave. If the tenant has not left after that time, then the next step is for the landlord to obtain an Order of Possession of the premises.

Tenant advocates and some welfare groups are very critical of this piece of legislation. Shelter, a peak-body for tenants on low incomes, says that "without grounds' evictions underline and emphasise the power differential and result in tenants trading off their rights against the fear of eviction'
'A Better Lease on Life-2010 Shelter'

Apart from the 120 Day Notice to Quit, another way to evict a tenant without the need to supply a reason, which is discussed in the article, is when there is a Fixed Term Tenancy.

Incidentally Fixed Term tenancies are the only way a tenant can be evicted 'without grounds' in Tasmania. It is the only state in Australia where 120 Day 'no cause' Eviction Notices have been strictly curtailed.

The article, 'A Question on Notice' ( link below ) written by an industry advisor to Community Housing managers on VCAT issues, addresses this.

It states that one 'advantage' of putting tenants on fixed-term tenancies ( as low as 6, 4 and 3 months ) is that it enables the landlord to issue Notices to Quit which coincide with the end of the fixed term.

Another tactic for landlords wanting to evict a tenant is to simply raise the rents to market rates!

The article goes on to say that Community( aka social ) Housing landlords should not arbitrarily 'move on' people with a 'difficult personality' but that 120 day no-cause eviction notices should only be used when there is a 'genuine problem'. Indeed - how disturbing and depressing that these practices occur.

We have heard reports by Community Housing tenants, very critical of certain practices by some Community Housing Organisations, and we urge Minister Foley to start listening to the reality of people's experiences. He has a Duty of Care to do so.

Finally, the article discusses the practice of 'rolling eviction notices.' As if 'no-cause' evictions are not unfair enough as it is, some Community Housing Providers are going one step further and issuing rolling- ie continuous-eviction notices to every resident every 120 days !?

Imagine the implications of that...  Eviction notices can be used as a form of social control and intimidation. Residents in boarding houses, who have done nothing to deserve it, are constantly having the threat of eviction- and subsequent homelessness- hanging over their heads.

The author, who believes it is best that these notices be avoided, advises that the practice of rolling eviction notices "would likely be shot down in flames in the Supreme Court under the Victorian Charter of Human Rights."

He says that when considering 120 day Notices to Quit, there should always be a valid reason for it and quips, "You are not just evicting them because they are a Collingwood supporter. At least I hope this vile practice has stopped"

In spite of its faults as a landlord, the Victorian state government has also had a history of being a fair and compassionate landlord. The Department of Human Services employed staff who provided specialised support for people whose tenancies were at risk - so they could remain safely housed rather than be evicted into homelessness.

Unethical practices like 'rolling eviction notices' were never part of the way the government operated.

Why has no-one blown the whistle on this Human Rights abusive practice before now?
This is a shocking way to treat vulnerable people. 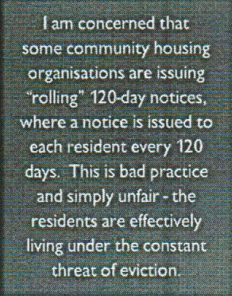