THE SCANDAL OF MARKHAM ESTATE 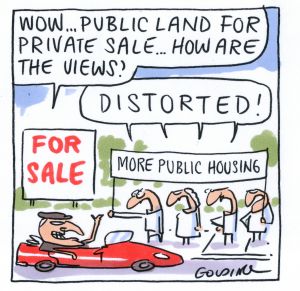 The public support us in our struggle to stop the privatisation of Public Housing- there is no doubt about that.

And so do some of the smaller churches who have privately congratulated us and encouraged us to 'keep going' in what is a David and Goliath battle.

Friends of Public Housing rarely get a negative response from the general public- the man and woman on the street. On the contrary- they are very interested in what we have to say and are totally opposed to giving away the titles of Public Housing, as ALP Housing Minister, Martin Foley, has said that he is prepared to do.

Under the Brumby Labor government, as part of the major 'redevelopments' of the Carlton Public Housing estate, local residents and stakeholders from the Carlton Residents Association (CRA) tried very hard to ensure that the Labor Brumby government abide by principles of social inclusion in its plans, and strongly defended the rights of their public tenant neighbours. Here's what they said about the process and the outcome.

"At a pre-election forum (8 November 2010) Minister Pike proudly announced, as justification of privatisation, that all private units were quickly sold off-plan. It is scandalous, in this
time of affordable housing crisis, that 80% were purchased by overseas investors."

That should be more widely known don't you think?  Australand, despite its name, is a Singapore based developer.

Today the waiting list for public housing is even longer- and we are seeing much the same spin and projected outcomes, from the Andrews government.

Let's look at the current situation in Ashburton where the local residents are up-in-arms. Boroondara Council has criticised the government, and stated their support for public housing.
( a poor response to this by the VPTA - the peak body for public tenants -to a proposal that treats public tenants like third class citizens )

Is it so unusual, as the article suggests, that local residents in a well-off area are advocating for more public housing?  It does not altogether surprise me. I am not as cynical as some in that respect. We talk to a wide cross-section of people. And as I said, the support by Carlton Residents Action Group was fantastic. 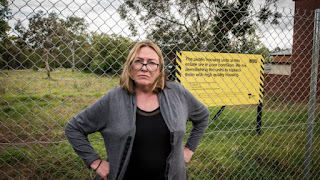 Here's the article by Clay Lucas.

'It is 1.4 hectares of the best vacant land in Ashburton – where the median house price is $1.5 million, and even apartments sell for an average $1.1 million.

Perhaps best of all, given the Andrews government solemn promise to tackle housing affordability, this prime land is publicly owned. It is close to a railway station, next to bike paths, sports fields, a playground, thriving community gardens and a golf course. Where better to build new public housing, to help some of the 33,073 people on Victoria's waiting list?

That's not what's happening here though, despite a reminder from the government's Infrastructure Victoria this week that the state desperately needs more affordable housing.

The 56 dilapidated commission flats that once stood there were known as the Markham Estate. Those squalid units – Planning Minister Richard Wynne this week said it was "not even Third World [standard]" – were demolished in January.

Now, 70 per cent of the site will be set aside for private apartments, in buildings rising to six levels – with soaring views over a nearby creek, and direct access to parklands.

The public housing will be rebuilt, with an extra six units – but on the worst corner.

The government will reap millions in profit from the private sales, and promises to put the money back into public housing.

Locals are furious about the plan, with a residents' group saying the private development is far too big. And, unusually for a well-off area, the residents group is calling for more public housing.
They argue there is a perverse logic in the government claiming it will tackle the public housing shortage by selling public land.

Another, Susan Rayner, says the large site could accommodate far more public housing, but the government wants to capitalise on "the views across the parklands and creek ... and raise some serious money by flogging it off” Instead of having nice dwellings for public housing, they are cramming them in on the least attractive side of the land," with public housing "segregated" from private, she says.

She says the area is perfect for low-income families to raise children. "We don't want million dollar apartments with fabulous views. What we do want is for that land to be used for the purpose it was set aside: for the public good."

One document given to the residents' group under freedom of information refers to the "super-profits" from the private development. The government says this term is no longer relevant to the Ashburton site.

Boroondara Council opposes the plan too, because the planning minister will take the approval process off it. Garry Thompson, the councillor for the area, says residents are rightly outraged, as they won't have a chance to object. The council is also arguing for more public housing instead of private apartments.

The government argues that, by selling the 190 private apartments its in-house developer Places Victoria will build, the site will "self-fund" the replacement public housing. And the government has pledged that any extra money generated by the project will be poured immediately back into public housing elsewhere in the area.

A government spokeswoman says the public housing will not be segregated from the private apartments – although plans for the site clearly show a border between the private and public land. "The public and private housing will be integrated, with common features such as car entry, walkways, and landscaping," she says.

Melbourne University urban geographer Kate Shaw says the proposal is "an improvement on the housing estate redevelopments of previous governments", if the public and private housing really are integrated, and profits from private sales get invested in more public housing. This did not happen on public-private partnerships at the Carlton and Kensington housing estates – there, public and private housing were very clearly segregated, and developers walked away with huge profits.

Dr Shaw says that, if it is accepted as legitimate to sell public land to build private housing, and its sale in turn funds public housing stock upgrades, then the government must retain the profits.
"The government can't partner with a private developer who is going to walk off with a bucket load of money," says Dr Shaw.  She also questions why badly needed public housing is not simply funded out of consolidated revenue. "But given the constraints that every government is subject to, perhaps this is the best we can expect."

Raoul Wainwright, from the Victorian Public Tenants Association, also says the reality is that housing groups have to take what they can to push the government to do something. The plan to rebuild the Markham Estate will at least see it rebuilt, with extra dwellings, he says. For years, residents at the Markham Estate lived in appalling conditions, Mr Wainwright says. "And for decades successive governments found excuses to do nothing about it."

"Don't be beguiled by Government spin into thinking it really cares about public housing (The Age 2nd December: “Prime Public Housing Sites To Include Private Units”). The Markham public housing estate in the back-streets of Ashburton serves as an example – strangely not mentioned, although its progress is way ahead of the quoted start date of 2018."

"Public housing is part of Government infrastructure like roads, public transport etc. Selling off a significant part of it is a perverse, cynical approach to its management, especially when demand is at an all-time high."

Plans for the privatisation of land following demolition of low-rise 'walk-ups' have also stated 2018 as their starting date. But public tenants received letters days after Martin Foley's shock announcement and surveyors can already be seen on Northcote and Ascot Vale estates according to our sources.