I ANSWER QUESTIONS PUT TO ME BY A JOURNALIST 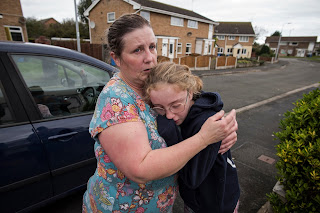 Questions put to me by a journalist.

Only a small quote of what I wrote got into print. I post it here in full, with some updates, because this is the type of discussion we really need to be having publicly - before it's too late. More privatising of Public Housing across to Social/Community Housing is in the pipeline.

And since we are following Britain's housing policies, read about the mass transfers of UK Council Housing in Britain ( their version of Public Housing ) that have already taken place, with disastrous consequences in terms of housing stress, poverty ( bedroom taxes ) and increasingly visible homelessness.

More and more voices are now joining together, saying the same thing - that the growth of Community (social) Housing must not be at the expense of Public Housing!

A link to the article in question is at the bottom of the page.

How did you get involved with Friends of Public Housing? What's your role with the group?

I'm a public tenant. My neighbour Jeremy Dixon and I used to be public tenant representatives for our estate in 2012 and attended meetings with the Department of Human Services. We discovered in our roles, that the government was handing over the ownership of public housing, under Labor's 'Asset Conversion Strategy'. I felt that it was wrong that titles of public assets were being given away and the general public was completely unaware of it. No-one believed us when we said that the government was "giving away" public housing, but in fact state governments had been doing it for some time. This is why today only 2.7 % of all housing in Victoria is public housing!

Meanwhile the need for public housing is growing all the time, and homelessness is escalating!

I am the convenor of Friends of Public Housing Victoria and together with Eileen Artmann, who founded the Facebook page, we act as spokespersons for the media.

Why is it so important that social housing stays owned and run by the government?

First of all it is a function of the government - its Duty of Care and its responsibility- to ensure that all our citizens have a roof over their head. Homelessness is is an indictment on a prosperous country like Australia.

These properties are desperately needed public assets- now and for the future. They belong to the people of Victoria. The government has no right to dispose of them in this way. The fact that they are largely doing this in secret, seems to indicate that they are aware there would be more public opposition to their plans, if the public knew of it.

Community Housing Organisations consist of about 60 separate businesses in Victoria with varying policies regarding rent-setting and eligibility. They cater to 'low to medium' income earners, and unlike the public housing system, they can cherry pick who they house. The most vulnerable people, including the homeless, are often overlooked by Community Housing businesses. This policy direction is creating an underclass of homeless people with nowhere to turn, since we are losing public housing all the time, through demolitions,transfers to Community (Social ) Housing and sell-offs to the private sector.

The Public Housing system provides greater security of tenure for vulnerable people by offering them flexible rents that go up or down, depending on changing life circumstances, in Community Housing this is largely absent. Community Housing ( aka social housing ) often puts tenants on contracts, whereas Public Housing offers permanent tenure. There are more safeguards in Public Housing
regarding rent-setting.

So you see, that although Public and Community Housing now go by the umbrella name ‘Social Housing’ they are two very distinct models of housing with serious differences and implications for tenants.

Do you see a risk that if social housing sites are privately owned, their use might be changed down the track, leaving people more vulnerable?

Yes. Community / Social Housing has been part of the housing landscape in Victoria for several years now, and we are already seeing indications of this. They cater for low to medium income earners. Extremely desperate people with high and complex needs are often ignored by 'Community Housing'.

Many of these applicants referred by the government were those in the greatest need, or had been waiting many years for housing.

In response, the Community Housing Federation stated that Community Housing Organisations are 'independent bodies and are not subject to the control or direction of government unless there is a specific legal or contractual obligation in place to do so.The DHHS Guidelines are perhaps therefore better understood as a statement of general intent by government as to its desired outcomes.'

The peak body also attempted to justify the practice of favouring higher-paying tenants, by complaining that they receive no financial compensation by the government to house those on very low incomes. ( The largesse given to them by successive governments in terms of properties, funding and ongoing Commonwealth Rent Assistance is staggering. )

The writing is on the wall.

The people that Community Housing is failing to house, will find that they have nowhere to go. If the government continues to hand over public housing to these very businesses, there will no longer be the safety net of Public Housing!

What would you say to those who see a need for public housing to be built or updated by whatever means necessary – even if it means private developers are footing the bill?

I would say to them, "How bad do outcomes have to be before you tell the government to go back to the drawing board?"

The "Public Housing Renewal Program" will result in a massive loss of irreplaceable public land to private developers, ( around three quarters ) and only a token increase of 'social housing' (10% ). Three bedroom family units will be replaced by 1 and 2 bedroom units resulting in an actual decrease in capacity to house people, and it's unlikely, that even that will be genuine public housing. With a waiting list of 37,000 applications for Public Housing, ( made up of 58,000 adults and 25,000 children )  Labor’s housing policy direction is indefensible.

Does Friends of Public Housing support not-for-profit organisations building and running public housing? Why or why not?

The small housing providers are becoming a thing of the past. The changing face of 'Community Housing' is that we are dealing with increasingly large corporations. The eight major players, the Community Housing Associations, those that are most likely to win the tenders, are also property developers.

The term ‘Not-for-Profit’ can be a bit misleading because they are still required to be
profitable in the usual sense of the word - their income needs to exceed their expenses. And to achieve this end can be often be at the expense of the tenants. ( ie cherry picking prospective tenants and raising rents if need be )

An ongoing stream of federal public money in the form of Commonwealth Rent Assistance is required by not-for-profit Community Housing businesses as an operating subsidy. Public tenants do not need CRA because their rents are truly affordable, being outside market forces. We think that this ongoing stream of funding would be far better used to build more public housing.

What do you think needs to be done to provide the large amount of public housing needed in Victoria? Where does FOPHV want the government to get the funds from?

Victoria recently received $2.077 billion from the sale of the Snowy Hydro Project, and an unexpected $1.8 billion from the GST. These windfalls need to be spent on improving infrastructure. I cannot think of a project more deserving and more necessary than improving and delivering more public housing to address the housing crisis and homelessness.

Sometimes it is not so much the lack of money, but the lack of political will that’s the problem..

Take the complete and utter waste of 9 billion dollars in Federal funds to address the housing crisis and homelessness under the Rudd Housing Agreement which began in 2009. Not one benchmark was achieved by the states in all that time! Where did all that money go? The executive director of Federation of Housing Associations admitted that there had been little transparency and it was "difficult to understand how that money has been spent"! During that time, the amount of Public Housing continued to decline and was allowed to fall into disrepair.

Would FOPHV members call themselves, for all intents and purposes, "PHIMBYs" ( Public Housing In My Back Yard )

Yes we are PHIMBYs. We want to see a robust, well-managed public housing sector which will provide housing for a broader demographic and present a viable alternative to home ownership and the private rental market.

Do you think there's a growing number of people in Melbourne who want to see public housing
kept public?

Absolutely. When we take our message to the streets, we find that most people are completely unaware of the paradigm shift that is occurring. They are confused by the terms 'Public Housing, Community Housing and Social Housing' which are used interchangeably and obfuscates the fact that public housing is being privatised by stealth.

When the public learn of this, they are shocked. The public generally oppose the privatisation of public assets. They know that the market will not be able to solve the housing crisis and homelessness.

Interestingly when the Liberals were in power in Victoria they were more frank about describing the transfer of public housing to Community / Social Housing as privatisation, whereas Labor seems to want to avoid the word at all costs.

2. The Australian "9BN home affordability scheme to be dumped in May Budget"