DEMOCRACY IS NOT A SPECTATOR SPORT. I personally believe that it is very important for citizens to become active in affecting change, and this is something we should all be doing, if we possibly can. Go where your passion is, and make a difference! It is written into the Charter of Human Rights that citizens have the right to partake in political and public life.


MEET THE ACTIVISTS WHO ARE FIGHTING TO SAVE PUBLIC HOUSING 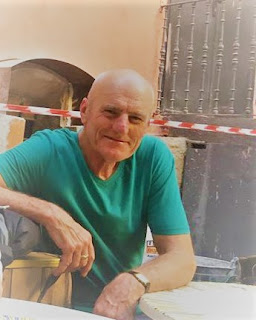 The following BLOG-POST which addresses the issue of housing affordability is by MICHAEL NAISMITH - member of the PUBLIC HOUSING DEFENSE NETWORK.
PHDN is organising the following RALLY. Put the date in your diary.
Come along, bring your friends and help us to SAVE PUBLIC HOUSING.
Visit us on Facebook    https://www.facebook.com/publichousingdefencenetwork/
https://www.facebook.com/FOPHVIC/ 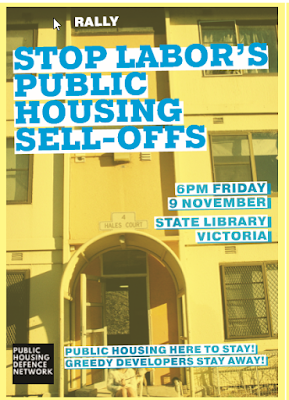 WHY ARE ORDINARY PEOPLE ALWAYS AT THE MERCY OF PROFITEERS?
Does it have to be that way?

A Short History of Rent Control in Australia
by Michael Naismith


What is rent control?
Rent control is a form of regulation limiting the amount of rent a private landlord can charge. It can also include putting limits on the size of rent increases, or how often increases are allowed to be implemented.

Lots of people have heard that rent control, or rent regulation, exists in some counties in Europe, or in some states in the US, but very few are aware that it has also existed at various times in Australia.

For the most part governments have been forced to reign in private landlords during times of economic and social crisis.

Rent control was first introduced in New South Wales during the First World War in 1916, as part of the Fair Rents Act. This Act was amended in 1928 to wind back rent controls, but during the Great Depression rent controls were reintroduced with the Reduction of Rent Act (1931). This resulted in a 23% reduction in rents and restrictions on evictions.
The powers-that-be once again ended rent control with the Landlords and Tenants (Amendment) Act in 1932. This chopping and changing mostly coincided with changes of government at the New South Wales state level.

At the beginning of World War Two, 50% of all households were tenants of private landlords. The Commonwealth, under its defense powers, introduced the National Security (Fair Rents) Regulations 1939. This gave the states the power to freeze rents and establish Fair Rent Boards.

A form of rent control existed in most states across Australia and continued until August 1948.

At this point there was a constitutional challenge against the government’s right to continue wartime price controls. These controls were kept in the context of social unrest, strikes, communist agitation and the recent experience of the Great Depression. The constitutional challenge led to an unsuccessful referendum, where the Chifley government attempted to gain back rent and other price control measures.
The Landlord and Tenants Act 1948 maintained rent control in New South Wales beyond this, in order to provide security of tenure to all tenants. This was because of the dire need for accommodation following the war.
In 1954 however, all newly constructed buildings were exempted from the Act, and by 1956 a premise could be ‘decontrolled’ when vacated if registered with the Fair Rent Board. In 1960 there were still 207,000 controlled dwellings, which amounted to two thirds of all private rental properties.

In 1968, ‘wealthy tenant provisions’ were introduced to bring rents up to market value, winding back rent control further.
By 1974 there were only 20,000 rent-controlled tenancies in New South Wales and by 1986 no new protected tenancies could be created. The exception to this was ‘inheritance’, where if tenant died then a spouse or dependent could continue the lease.
A similar story played out in Victoria, where the Landlord and Tenants Act 1958 restricted the application of rent control provisions to ‘prescribed premises’.  In 1956 there were 180,000 protected tenants, but this was slowly whittled away. The Residential Tenancy Act 1980 aimed to remove rent control on the remaining premises over a period of two years. It was estimated that up to 10,000 pensioners still had rent control at that stage, and this Act caused a massive increase in rents for those least able to afford it.
In place of rent control, a new system was established in Victoria where a tenant could complain to the Residential Tenancy Tribunal if an increase in their rent was considered excessive. This was nowhere near as effective as proper government regulation.
Western Australia commenced the decontrol of rent in 1951. In Tasmania, rent control ended in 1955. In Queensland, protected tenancies were abolished in 1970 and in South Australia in 1962.
Today renters face renewed financial pressures, with millions once again suffering from rent stress. This is a direct consequence of landlords, developers and speculators making billions of dollars from people’s intrinsic need for a place to live.
As it stands, the rights of renters in Australia have been severely curtailed. There is a desperate need to build a movement of renters to pressure governments to overhaul the laws and grant renters much improved rights.
Rent control and other reforms have been won in the past, they can be won again. Let’s renew the fight!


The Renters Fightback campaign calls for private rents to be capped at 20% of a tenant’s income, in addition to a requirement for landlords to be forced to maintain rental properties at a high standard. Tenants should also have the right to demand long-term security of tenure, including infinite leases.
For more information visit: https://www.facebook.com/RentersFightback/

by Michael Naismith
Posted by Fiona Ross at 03:29