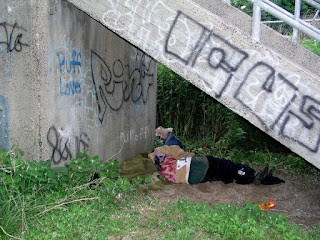 Read about the privatisation of public housing ( known as council housing in Britain ) as experienced in the UK.  In Victoria we are going down the same path of stock transfers. In fact the process has been well underway in Australia for years. Homelessness nationally is escalating - but nobody is joining the dots ... Instead of open, reasoned debate and accurate information, we get endless spin and whitewashing, accompanied by propaganda against public housing / public tenants.

In Victoria public housing has been estimated to be an asset worth 18 billion dollars.

Keith Parkins
'Housing associations, or Registered Social Landlords as they are now known, are becoming a powerful oppressive force within our communities.' - Mike Lane, campaigner.
'You get videos showing how marvellous your house will be, fantastic bathrooms with palm trees on the wall - they're a delight to the eye. But it isn't true. Tenants from Tameside will tell you the promises weren't fulfilled, repairs weren't done, their homes weren't renovated.' - Austin Mitchell MP

'Some of their new housing is hideous to look at. Some of their relationships with tenants are poor. Their record in repairs is not necessarily one of the best and their responses to queries can be slapdash, when supplied at all. In being accountable for what they do, they have a poor record.' -

Gerald Kaufman MP
'Tenants' campaigns against stock transfers, promoting alternative council housing manifestos and demanding improved public services are, in practice, an integral part of the growing international movement against the WTO. It may start with opposition to Labour's privatisation plans but it is rooted in wanting a better world for all free of exploitation, commercialism, greed and corruption.' - Dexter Whitfield, 'Defend Our Council Housing'

Much of what we take for granted - free health care, welfare, social housing - we take for granted without a second thought. Yet none of it existed in the 1930s. Illness could lead to debts for life, housing was back-to-back slums, and if you were out of work, you starved.

Then came the social reforms of the 40's and 50's. But the rot started to set in again under Margaret Thatcher, and has accelerated with a vengeance under her inheritors, Tony Blair and New Labour. Until Thatcher, social housing was under the council, and nobody envisaged anything else. Then came the 'right to buy'; when, in an attempt to undermine labour councils, housing was sold off at prices which bled the community chest dry.

And now, following on its heels, the wholesale transfer of the remaining council housing stock to Housing Associations. They are so-called social housing landlords, but often, in practice, are closer to property companies, and becoming synonymous with fat cat salaries, deteriorating properties and rising rents.

But this has not stopped the process. Take Tyneside, for example, where the social housing is still council owned - just. The council has amassed a £4 million war chest to lower council taxes for the next election: meanwhile, its estates are in an appalling state of repair. Tenants have been told that privatisation is the answer.

In fact, the transfer of council housing to a housing association or company threatens tenants' rights. Council tenants' secure tenancies are replaced with less secure 'assured' tenancies, making eviction easier. Rents are, on average 17 percent higher than council rents. There is little, if any,
accountability. Tenants have no automatic right to representation on a Housing Association board of management, and tenant board members are often excluded from decision-making. Large salaries are the norm rather than the exception. By 2001, the pay of Housing Association chief executives increased by almost three and half times the rate of inflation.

Forty-seven percent of Housing Associations breached government rent guidelines for 2001/2. There is also increasing evidence that Housing Associations are contributing to the growing homeless crisis. According to the Housing Corporation, evictions rose by 36 percent between 1998 and 2000. In Scotland, Housing Association evictions rose by 64 percent in two years. There was also a large rise in the use of the controversial 'Ground 8', which, under an Assured Tenancy, allows for automatic possession orders for thirteen weeks' rent arrears, even if these are due to housing benefit delays.

Transfer of housing stock to Housing Associations is, say campaigners, nothing less than back-door privatisation of social housing. And as with PFIs and PPPs, the cost to the tax payer escalates, and tenants suffer deteriorating services at higher costs. This has to be seen within the context of WTO/GATS wholesale transfer of public services to the private sector, where private greed overrides public need (and removes any form of democratic control or accountability). Of the 106 areas to be liberalised (ie opened up to the private sector), housing is one. All transfers of housing stock will be subject to open competition and could be acquired by international private landlords. Such 'liberalisation' may even specifically prohibit Tenant Management Organisations, which could provide a democratic, accountable alternative to both housing associations and council housing.
Campaigners opposing the privatisation of our social housing should also be opposing GATS. And vice-versa. It is our complacency which is letting what we take for granted be, not eroded away, but wrenched away.

'We are told that the private sector can raise the money to invest in modernising and repair the housing stock - creating a utopia in social housing. I never realised that the bankers, brokers and consultants were philanthropists, moneymakers with a social conscience. But the housing transfer scandal is not solely about handing over public assets to the private sector - it's about the dismantling of our social fabric, removing public assets from democratic control' - Mick Graham, housing rights campaigner.
Posted by Fiona Ross at 14:57