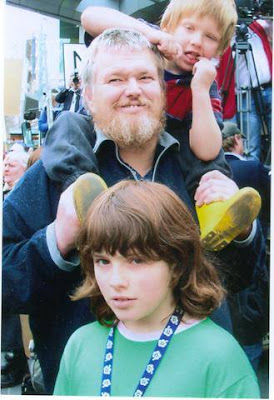 I'm Jeremy . I live in a public housing estate in . 'Walk-ups' as we call them –which are blocks of 3 storey flats, as opposed to the High-Rise tower-blocks. The 'walk-ups'were designed for a community mix of singles and families and comprise of units with 1, 2 and 3 bedroom flats.

I want to talk briefly about public housing and the main issue I see which is facing it- which is the transferring of the properties- also known as stock or asset transfers.

There is a bipartisan agreement between the Liberal and the Labor governments - also unfortunately the Greens – that the best way to deal with Public Housing in the future is to hand it over to entities known as Community Housing – in other words to privatise it. Although Public Housing is very much a state policy concern - it is also driven and coordinated federally.

Community Housing Organisations have sometimes had their origin in charitable trusts to provide housing for the poor- but have since been built up through government policy into a kind of hybrid entity – part business, part charity - sometimes having the worst features of both.

It has become a consensus around the housing industry that these entities - Community Housing Organisations- are the future of low-cost housing. A remarkable level of concensus about this has been achieved, without the public in general hearing very much about it at all.

I used to be involved in the Regional Tenants Council which were participation bodies set up by the then Labor govt to make some show of engaging tenants in participation of policy and to provide feedback from public tenants to the Office of Housing. My friend Fiona was also involved in this Council and we found out that the government was engaging in massive stock transfers. When we followed it up - through the wonders of the Internet- looking at policy documents and so on, it became clear that this was already a deeply entrenched policy. This all happened in the last days of the Vic Brumby Labor govt and during the government.

The spooky thing was that when we tried to talk to staff involved in public housing about it, they would look us straight in the eye and deny it. As I soon discovered in dealing with them, there is a culture in the public housing bureaucracy of what you might call, a patronising attitude to tenants. A prevailing attitude is that there is no need to tell the truth to public tenants. This is fairly ingrained. It even infects some of the good and dedicated workers within the bureaucracy.

In the case of wanting to know more about the stock transfers the situation was quite bizarre.
We had documents in our hands referring to the stock transfers. One could read on the Internet, parliamentary papers and find discussions about it, but when we wanted to know more, Housing Office personnel acted as if the whole thing was a complete fantasy on our part.

An employee from the peak body for public tenants, the VPTA- an organisation which works closely with the government, told us that because Community Housing had been managing the properties for some time, handing over the deeds was a mere formality. This is how it is often done. First the management is transferred and then later, presumably to minimise any resistance to the agenda of privatisation, the titles are handed over.

The program of privatising Public Housing to the benefit of Community Housing Organisations is continuing to happen. Labor and the Greens will often avoid talking about the stock transfers unless you pin them down.

For those interested in the future of Public Housing the challenge is to find some way of breaking through the wall of silence and the consensus which has already been achieved among those who work professionally in the housing industry.

Many privatisations have taken place already which the Left have been unable to stop.
Now we need to focus on housing. After all housing is a basic human need. We all need somewhere to live.

We need to find a way to fight this issue.