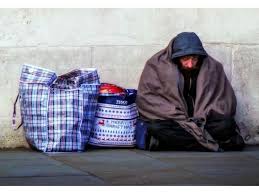 AUSTRALIA IS GOING DOWN THE SAME PATH - AND ATTEMPTING TO ADOPT THE SAME TACTICS...

Rather than solve homelessness, the goal seems to be to push the problem out of sight and out of mind. Such tactics have already been tried, and have failed in other countries.

Systematically vilifying homeless people and applying ever more varied punitive measures, designed to make life even harder for them - demeans us all.

The only sensible solution is to provide housing for all our citizens - by ensuring a robust public housing sector.

The following article presents a holistic argument, and contains a real message of hope- as US municipalities take heed of a decision handed down by the Dept of Justice.

The article is titled

'No Camping,' and Other Laws That Sneakily Push the Homeless Away - Oct 2015

written by Robert Rosenberger,
Associate Professor of Philosophy in the School of Public Policy
at the Georgia Institute of Technology.

"Is it Constitutional to outlaw sleeping in public when people don’t have any other option?

Early in August, the Department of Justice weighed in on a legal dispute over ordinances in the city of Boise, Idaho, that make it a crime to sleep in public. The plaintiffs, who first filed the lawsuit in 2009, were themselves homeless people convicted of disobeying these laws. In its statement, the DOJ argues that, in instances when shelter accommodations are unavailable, it is unconstitutional to criminalize sleeping in a public space.

In the DOJ’s eyes, it’s a violation of the Eighth Amendment, because it’s cruel to punish someone for sleeping in public when no viable alternative exists.

While the judge threw this particular case out (much to the apparent pleasure of Boise’s mayor) in part because some of the plaintiffs are no longer homeless, he noted that there’s no reason that eligible plaintiffs couldn’t file a similar suit in the future.

The DOJ’s statement did more than simply weigh in on the Boise case—it presented U.S. cities with a legal test for laws that effectively outlaw homelessness. Municipalities across America have now been notified: If a law criminalizes sleeping outside when shelter space is otherwise unavailable, then in the eyes of the DOJ that law violates the Constitution.

Some cities are already acting to align themselves with this notion. In direct response to the DOJ statement, some cities—such as San Francisco and Vancouver, Washington—are reconsidering their own camping and sleeping bans. And bolstered by the DOJ’s statement, several homeless plaintiffs are challenging the anti-camping laws in Sarasota, Florida, in court, with the aid of the ACLU.

Given the prevalence of anti-camping laws in the U.S., many more people could follow suit.

According to a National Law Center on Homelessness & Poverty report analyzing 187 U.S. cities, more than half prohibit camping, sitting, or lying down in certain areas, with more than a third banning camping citywide. That represents a substantial increase in such legislation in just the past few years.

In addition to introducing a legal test, the DOJ’s statement implies a moral one: What qualifies as needlessly cruel treatment of the homeless?

For example, the DOJ’s reasoning could be extended to consider whether it’s also cruel to prosecute those sleeping on the street when their practical options have been constrained by mental illness or addiction. And what if they’re denied shelter access because of their alcoholism, or they own a pet, or they run up against a maximum-stay limit, or they’d rather not take part in a shelter’s religious services? What if there aren’t enough local jobs for them to find employment? What if there’s a chronic lack of affordable housing?

Probing from this angle, a lot of the current legislation affecting the homeless appears to gloss over some basic moral concerns. The homeless can find nearly every aspect of their daily lives under threat: Cities enact ordinances against loitering, pushing shopping carts, storing personal items in public space, sleeping in cars, and panhandling. The cruelty that the DOJ identifies in anti-camping laws is just as present in these sorts of rules.

If it is cruel to criminalize these acts, then there is corresponding cruelty in the concerted effort cities make to design objects that help push the homeless population out of shared spaces.

Plenty of assumptions that violate the DOJ’s thinking are physically built into public spaces around the country. Parks and subway stations, for example, can have design elements that push away the homeless. There are plenty of benches that have been built in ways ensuring that they cannot be used as places to sleep—one common version includes armrests that prevent people from reclining along the width of the bench. And there are spikes and studs planted on ledges and other horizontal surfaces.

A prime example of this approach to design is embodied in the nation’s public garbage cans, simple, low-tech objects that fill a number of social roles. Some are fitted into cages of long, vertical slats as a graffiti-deterrence measure. Others are designed with a clear casing to make it more difficult to hide a bomb inside. Trash cans also appear to be designed with the goal of deterring homeless people from fishing out plastic and glass bottles, which yield payments when deposited at recycling centers. The express purpose of “rain hoods” is not to discourage such rummaging, but they do so nonetheless. Locking mechanisms, together with these hoods, often make sure a message is sent: If they can’t reach in, and they can’t open the door, then they’ll have to go elsewhere.

The combined effect of these design decisions—indeed, the nation’s developing stance toward the homeless in general—is not to solve the problem of homelessness, but to hide it. Current policies push homeless people out of public spaces and deeper into the margins of the city, or even into the spokes of the criminal-justice system.

But some garbage-can designs now include a separate rack where recyclables can be placed, making them easier for others to retrieve. Some trash cans in San Francisco, for instance, are fitted with separate baskets for bottles and cans. The city doesn’t actively recycle the materials left in those baskets, but instead allows the homeless to collect their contents.

This points toward a way forward: Providing for the homeless is probably the best strategy for all involved. In fact, studies are finding that simply giving homes to the homeless is much less expensive than the combined costs of emergency room visits, policing, and criminal prosecution. Just as there are other ways to design garbage cans, there are ways to write policies that are considerate of the needs of people who have very little"