A few years ago, as part of a Community Development project, I did a series of stories celebrating our elders on the Public Housing estate where I live.

This was a project undertaken as part of celebrating Senior Citizens Festival which falls in October of each year. Since this time of year is with us again, I thought I would include some stories here.

The truth is, our communities are overwhelmingly very functional, socially inclusive, richly multicultural and diverse.

Public housing, by its nature, epitomises community and we have strong community values. As a refugee neighbour from Sudan described it,  'Two hands can clap, but it takes a community to make a round of applause.'

These sound values, so often encountered in public housing, should be acknowledged, recognised and celebrated. Instead our communities are being constantly and unfairly denigrated, but that's another story.. 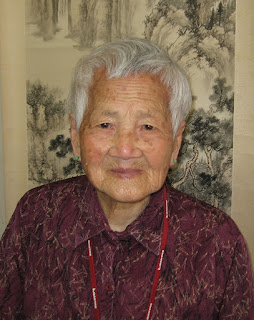 This is Sen Yao Lau. She is ninety four years old.

In Chinese her name means 'virtuous'. She is one of three children. Sen Yao Lau comes from the Qantong province in China.

Her father was a farmer. He was a very kind man. Everybody in his village would agree. He always tried to help those in trouble. If he was on his way to Yum Cha and he met a beggar, he would give his money to the beggar, turn around and come back home again.

Sen Yao remembers as a child walking a long way to school. In those days in China, women were illiterate and most had no education whatsoever. Sen Yao was very lucky. She had six years of schooling. She learnt calligraphy. At home her mother also taught her how to knit. The family had a small garden and grew all their own vegetables.

She was eighteen years old when she married in China. It was an arranged marriage. Sen Yau did not see her husband until their wedding day. Luckily he was a good husband; a gentle person. He was a carpenter. Together they had six children.

Of course they have all grown up now. Two of her adult children have settled in America, two live in Australia and two are still in China. Sen Yau has thirteen grandchildren.

Sen Yau and her husband were in their sixties, when their children helped them to emigrate to Australia. They lived in a high rise Public Housing flat in Fitzroy, and then moved onto the Princes Hill Estate. Sen Yao has lived on this estate for eighteen years. She likes living here very much. Sadly she lost her husband seven years ago.

In her flat she has a little Buddhist shrine and every morning she lights incense and she prays. Every day she likes to get some exercise. She weeds her little garden. She walks a lot and catches the tram into the city. Sometimes she visits her best friend who is 82 and also from China. They might go to Yum Cha together or shop at the Victoria Market.

Sen Yau understands very little English and gestures a lot to make herself understood. She is very kind and loving, and always seems to be smiling. When I visited her, she gave me flowers and herbs from her garden and lollies from her pocket.

Sen Yau cooks Chinese food; mainly vegetables and rice. She only eats meat occasionally. Her son brings her Chinese videos to watch on the television. She understands the weather report and every evening without fail, she checks what the weather is going to be like the following day.

She misses her grandchildren in China and the USA. She still enjoys knitting and makes hats, jumpers and scarves for her family and friends. Before I left, she made me an Origami paper crane to take home with me.