STOCK TRANSFERS A SUCCESS IN BRITAIN?


The previous post talked of a round table meeting in Canberra with heads of the Community Housing industry. They were calling to 'transfer public housing, including title, to not-for-profit community housing providers.'

As we know, in Victoria, Community Housing Organisations want the titles of 12,000 publicly owned properties to be given over to them. How many titles are they lobbying for nationally? Because what is happening in Victoria is happening in other states as well.

Of course, all this should be common knowledge - openly discussed.
Once these properties are gone- they are gone forever...

We have already lost a great deal of public housing in Australia. There was an inadequate amount to begin with. Yet nobody is joining the dots between the dwindling amount of public housing stock on one hand and escalating homelessness on the other. There is an unspoken consensus not to.As we have labeled it - the cone of silence.

Instead we are witnessing the development of a ( self-perpetuating to be sure )- homelessness industry. All public concern regarding homelessness is cleverly being funneled in the direction of charity based, business-model or service-provider solutions. And the truth about the public housing stock transfers is suppressed. In short it is never discussed.

In the previous post, it was claimed that massive public housing stock transfers have been 'very successful' in Britain and other parts of Europe.

Let's take a look at the UK.

In fact, the foolish and irresponsible UK government has long since lost control of the situation. It no longer has the power to reign in the housing associations or to remedy the desperate housing situation for countless British people on low incomes...

The housing association barons are shamelessly profiteering and all they get is a slap on the wrist by the media. They must be laughing all the way to the bank.


Young people and families struggling to get on the property ladder are finding it even harder because housing associations set up to ease the crisis have become “bedazzled” by the profits, a new report warns.


The study by the think-tank “Million Homes, Million Lives” calculates that housing association profits have grown tenfold in the last five years to stand at £1.93 billion.


Yet at the same time their operating costs have increased by only 11 per cent overall, the study finds. Forecasts suggest profit margins will increase further in the next four years.


It blames housing bosses for allowing rents to increase above inflation even though management costs have not. Housing associations, set up are to provide affordable social housing to some of poorest people in Britain, collectively own almost 2.7 million homes, the report says.


It accuses many of them of abandoning their original “social mission”, with a knock-on effect for the rest of the property market.


Natalie Elphicke, chair of Million Homes, Million Lives, who is also leading a Government review on Britain’s acute housing shortage, said: "Housing associations need to follow their guiding principles and not become bedazzled by the prospect of greater and greater profits.


"Every board member of a housing association should consider their social mission – are they doing all they can to help the least well off after the deepest recession in recent times?"


Calum Mercer, her co-author, added: “It is not right that housing associations are cashing in to such an extent on their social tenants.


“The excess profits are equivalent to £500 for each social home.”

So lets think about what that means.


Starting with one dollar- a tenfold increase = 10 dollars


To give you an idea of the stupendous profits the housing associations are making in the UK ( on the backs of the poor ) we have drawn up a Graph of Greed. 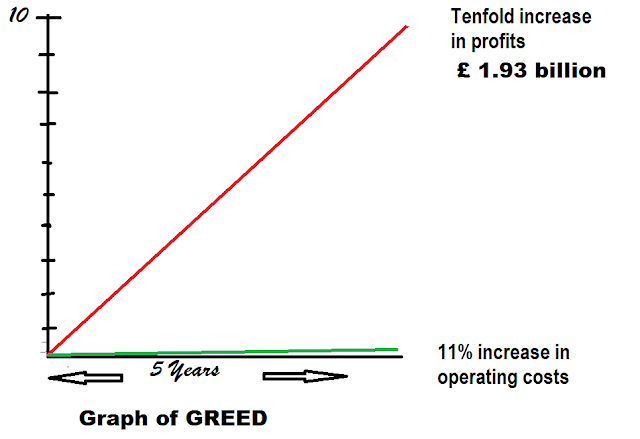