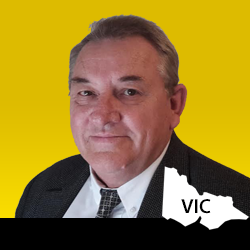 
Their Victorian candidates for the Senate
Roy Ridge and Graham McCarthy

"The Mature Australia Party supports Friends of Public Housing Victoria (FOPHV) in their call to stop the transfer, sale and outsourcing of public housing to both community housing organisations and private concerns."

Graham grew up in a public housing home in Melbourne's West with five siblings.
He understands public housing, public housing communities and our issues very well -
from his own experience. After leaving school he took on a cadetship with the police force and became a policeman in the community where he grew up. According to research, this is the most effective model for policing; where there is a genuine connection between the police and the community they serve.

Personally I have witnessed some very skillful and sensitive handling of potentially explosive
situations by the police when dealing with young people with mental health issues.

When they heard about the Direct Political Action undertaken by homeless people in the city, both Graham and Roy visited them to showed their support and solidarity.

Says Graham, "The people here in City Square are here, because they have nowhere else to go.
They live in improvised dwellings and tents, huddling together for safety and pool what meagre resources they may have. These people need our assistance. I have spoken at length to a number of them over a period of time. All of them have a story to tell. They are in the main, not here by choice
but by circumstance. They are people just like you and me. I am not naive; yes some have issues-but that makes them no less entitled to receive the same level of support extended to other members of our communities in housing,education and welfare."

It is disgraceful that the privatisation of public housing and the growing plight of homeless people have been completely left off the political agenda before the Federal Election.

Our campaign email address is on the Blog.
housing.humanrights@gmail.com