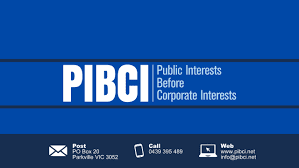 Statement of Support from PIBCI
Public Interest Before Corporate Interests

PIBCI is more than willing to support Friends of Public Housing Victoria
to oppose any further stock transfers of public housing properties to social community housing.

We also advocate that public housing should remain in public hands, both ownership and management.

As a movement PIBCI is committed to the safe-guarding of public assets and the further
improvement of such assets.

The take-over by private interest groups in our opinion will be increasing deregulation,
and ultimately it will become profit driven for stakeholders.

This is not in the public interest.


The convenor of PIBCI, Dr Joe Toscano is running as an  Independent Candidate in the
House of Representatives for Dunkley.

"At this Federal Election you, as a Dunkley elector, have a real choice. You can vote for the same old parties making promises you know they will never keep or you can vote for Independent Candidate Dr. Joseph Toscano. Made from the same mould as the early 20th century radical activist Louisa Dunkley, after whom the electorate of Dunkley is named after, Dr. Joseph Toscano has the experience, intellect, courage and tenacity to ensure making the 1% pay 1% becomes a central plank of Australian politics during the next three years if he is elected as the Member for Dunkley.

Over 150 billion dollars per year can be freed up for public health, public education, public housing, public infrastructure, public renewable energy facilities and the funding of a social security system that looks after the needs of all Australians, not just those with the disposable income to buy the best health, housing and education services money can buy."